Event supported by the Delegation of the European Union to Brazil and hosted by the National Council of the Federal Prosecution Service took place on 7 and 8 June, through the EU - Brazil Sector Dialogues Support Facility 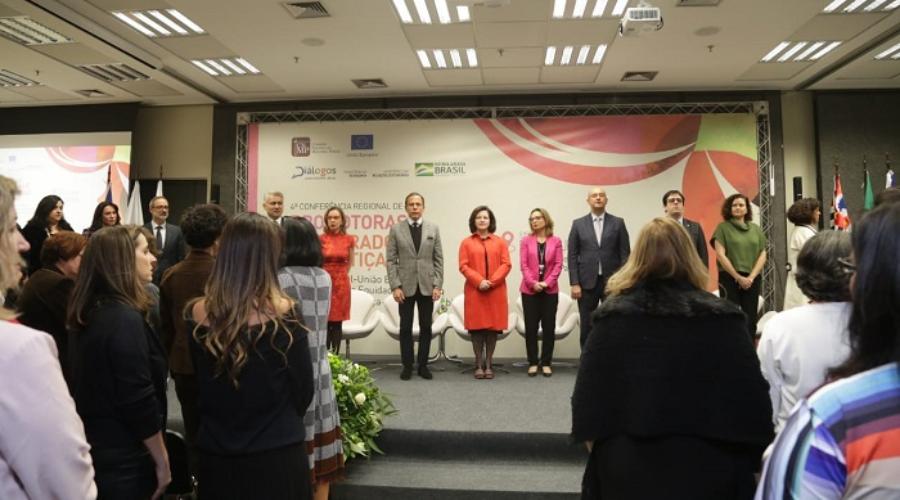 "This conference is not to challenge or confront anyone. It is actually an invitation to promote a good relationship between the men and women in our institution. Our goal is to have every prosecutor here present, men and women, not only perform their duties, but also rise to higher positions in our institutions".  These were the opening remarks of the chair of the National Council of the Federal Prosecution Service (CNMP) and Attorney General, Raquel Dodge, at the 4th Regional Conference of State and Federal Prosecutors - South-eastern Region. The Conference started on Friday, 7 June, in São Paulo (SP).  The meeting, promoted by the Council in partnership with the European Union (EU), brought together prosecutors from the State Prosecution Services of São Paulo, Minas Gerais, Espírito Santo and Rio de Janeiro, and took place at the São Paulo headquarters of the School of the Federal Prosecution Service.

According to Ms. Dodge, the event aimed to discuss the situation of women in the Federal Prosecution Service based on their experience and not on a purely quantitative survey.  "How do women members of the Federal Prosecution Office feel?  Do they suffer the same discrimination inside our institution as they do outside?", the chairwoman asked, inviting participants to an honest conversation.  "That's why we are here: to reflect. And to start a discussion in-house", she stated.

Maria Rosa Sabbatelli, head of the Regional Team of the EU Foreign Policy Instrument, thanked the chairwoman for the cooperation established over the last two years.  "This initiative is aligned with the EU take on gender equality," said Maria Rosa, stressing that the fight for equality between men and women is a moral duty and part of the continuing quest for social justice.

Governor of São Paulo João Doria, who also participated in the ceremony, said that "São Paulo is proud to be hosting you here for such an important debate".  "I deeply admire Ms. Raquel Dodge”, he added.  Associate state attorney general for Integration and Foreign Affairs Lidia Passos, assigned by state attorney general Gianpaolo Smanio, spoke about the views of the State Prosecution Service on the conference. "Gender equity does not only involve the emancipation of women, but the emancipation of society", she stated.

Gender inequality in the Prosecution Service

The low number of women in top political leadership positions and decision-making roles was confirmed by the survey "Gender Scenarios" commissioned by the Committee for Strategic Planning of the CNMP. The survey collected data on the participation of women prosecutors in leadership, decision-making and advisory roles since the Federal Constitution of 1988. The figures show, for example, that in 2017, the Federal Prosecution Service was composed of 5,219 female members and 7,802 male members, revealing a  60% to 40% ratio of men and women. According to the data collected, since the 1988 Constitution, 52 women and 240 men have held attorney general positions in the Federal Prosecution Service, that is, female leaders accounted for around 18% while male leaders accounted for 82% of the total.

In the South-eastern region of Brazil, data show that, of a total of 4,192 members of state prosecution services, 40.3% are women and 59.7% are men. In Minas Gerais, the state with the highest rate of women state attorneys general, the figure reaches only 20% of the total.

On Saturday, 8 June, the women prosecutors discussed the challenges and obstacles to entry, assignment, tenure, training and career, reflecting on problems, solutions and good practices.

Six workshops took place simultaneously, each addressing  previously defined topics, under the guidance of two rapporteurs and one coordinator for each topic. The pedagogical method included support materials and texts on gender equality and equity, which were talked about in advance with the pedagogical coordination and with the coordinators and rapporteurs of the workshops. The conclusions were then analysed at the final plenary session.