Cooperation agreement between CNMP, CNJ and MDH was signed at the opening of the "2nd Brazil-European Union International Seminar: Pathways to prevent domestic violence against women" 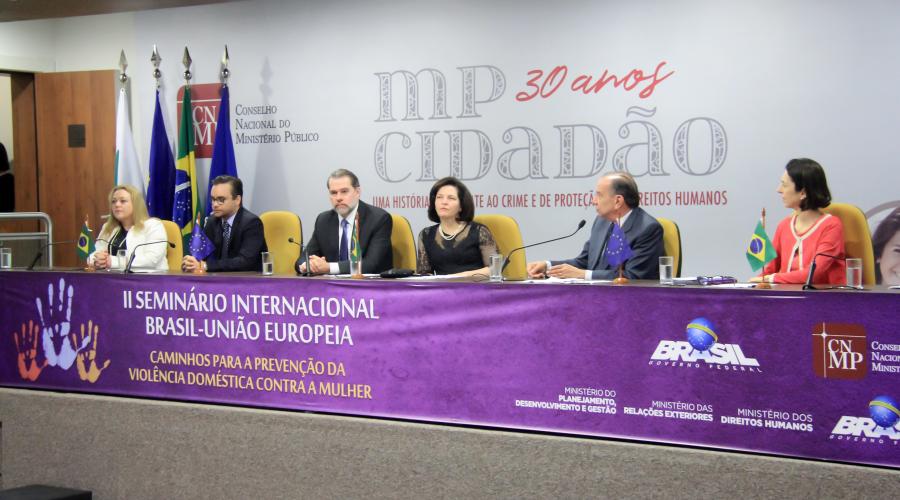 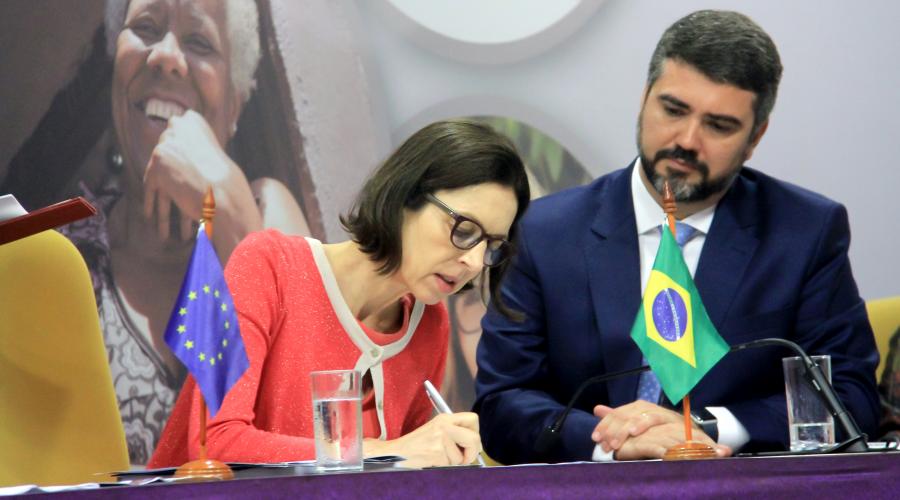 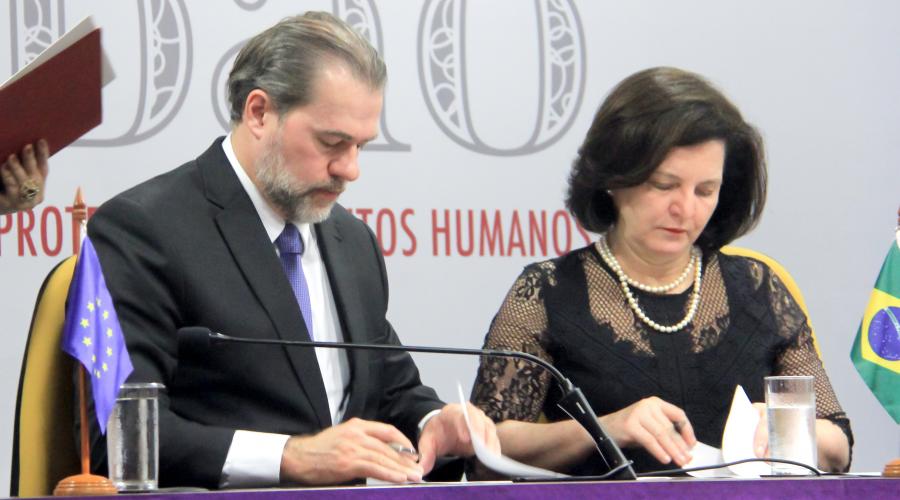 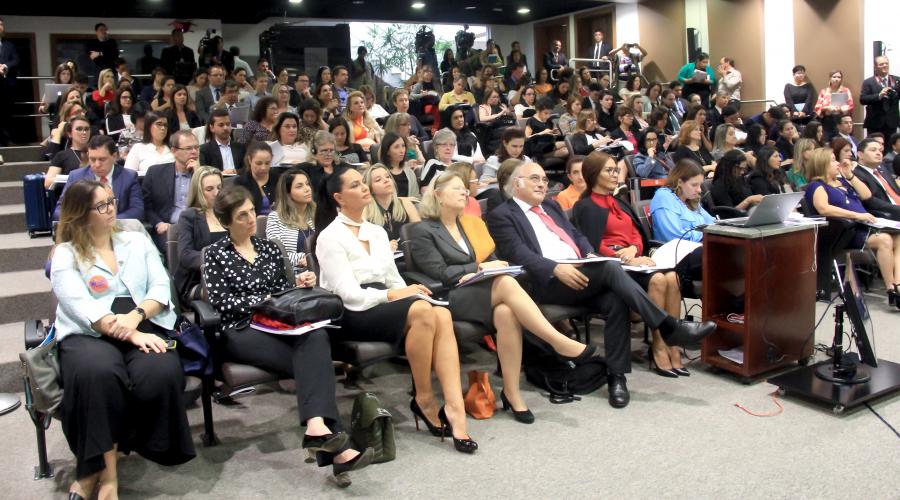 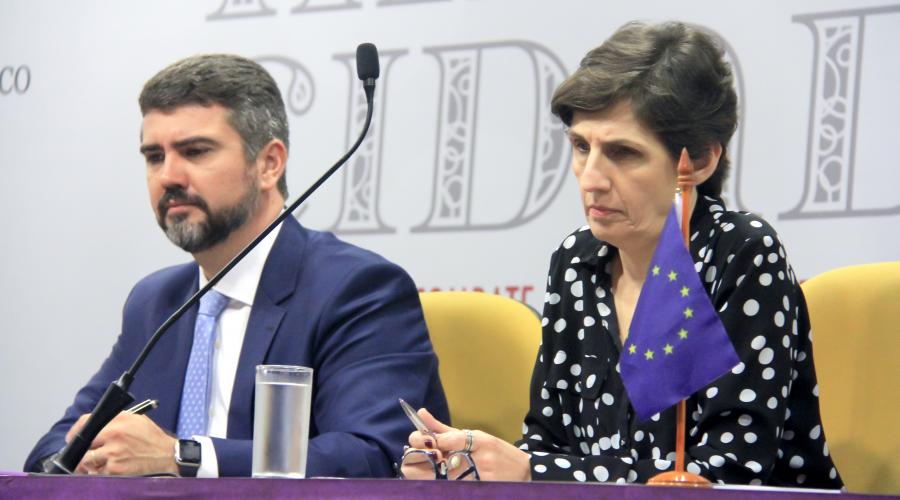 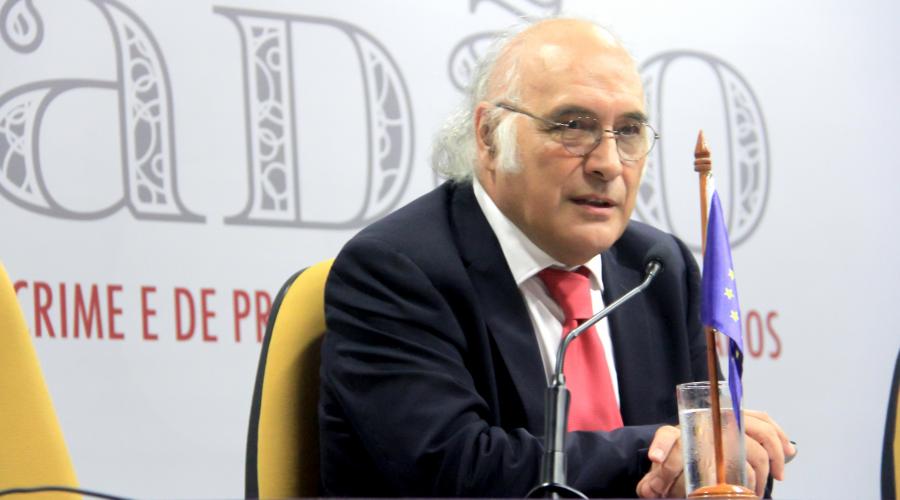 The National Council of the Public Prosecutor's Office (CNMP), the National Justice Council (CNJ) and the Ministry of Human Rights (MDH) signed a cooperation agreement on Wednesday to implement a national risk assessment form for preventing and tackling crimes that qualify as domestic and family violence against women. Claudia Gintersdorfer, Chargé d’Affaires a.i. of the Delegation of the European Union to Brazil, has signed as a witness.  "The plague of violence against women transcends borders and hurts societies as a whole.  That is why everyone needs to be engaged in the eradication of this evil, "said Claudia.

The signing took place during the "2nd Brazilian-EU International Seminar: Pathways to prevent domestic violence against women", carried out by the CNMP, at its headquarters in Brasilia, in partnership with the EU, through the EU-Brazil Sector Dialogues.

Entitled FRIDA, the National Risk and Life Protection Form brings questions whose answers will help identify risk factors that indicate the possible recurrence or first occurrence of episodes of violence.  The information collected should be reported to competent authorities for investigation and creation of police procedures and protective measures.

Technical visits made by representatives of the CNMP to Austrian and Portuguese institutions that provide shelter services to victims of such crimes were the starting point for the development of this form, which was created in a project supported by the EU-Brazil Sector Dialogues Support Facility, under the leadership of the CNMP Counsellor Valter Shuenquener and with the participation of Brazilian and European experts.

"Frida now joins the Maria da Penha Law.  Our role is to make people know this form exists, and establishes a policy to protect women so that they know when they are at risk," said Raquel Dodge, president of the CNMP.

For Dias Toffoli, president of the CNJ, "with the signing of this agreement, another important step is being taken in the fight against violence against women, and with the development of this form we will achieve great results."

According to minister Gustavo Rocha, from the MDH, Frida will be an extremely efficient instrument.  "Often, women who seek the Call 180 Helpline do not know how risky it can be for them. This form allows objective questions to be asked so that, in the light of the answers, it is possible to learn the degree of risk the woman is in."

In turn, Valter Shuenquener said he believed in the symbolism of Frida.  "It is essential that Brazil has now a document which transforms the subjective narrative of an episode of violence into an objective one that can facilitate legal action."

With the signing of this agreement, there will be a joint effort to have the form be used in procedures that investigate crimes of domestic and family violence against women within the Judicial System, the Public Prosecutor's Office, Police stations and the MDH, with the support of the National Registry of Domestic Violence (CNVD).

One of the highlights of the seminar was the panel in which the Portuguese academic and scientist Manuel Lisboa, representing the New University of Lisbon and the National Observatory on Gender Violence, and the consultant on public policies and violence against women, Wânia Pasinato, spoke about the creation and the importance of forms such as Frida, which they helped develop.

Manuel Lisboa explained that one of the forms that influenced the creation of Frida has been used in Portugal for three years by the police and the Public Prosecutor's Office. Once the answers are collected and the fields filled out, the attendant  prepares a diagram to verify whether the risk to the complainant is low, medium, or high.  Through the questions, information about the victim, the aggressor, the history and the context of the violence is gathered. "This can help save human lives indirectly. If you can save one, it's already worth it. "

Wânia Pasinato stressed that risk assessment should be only the starting point for the implementation of preventive actions, such as the adoption of integrated procedures to minimize the recurrence of violence and to enhance  institutional responses.  She also presented the 12 questions that are found in the summarized form applied in the Call180 Helpline and said that, according to data from this service provided by the MDH, 28.8% of the victims who call to report violence believe that they are at risk of being killed. She concluded by stating that "the adoption of a standardized form does not mean it should not be adapted to social, cultural and political contexts and specificities in order to provide better suited services for each woman."

In a panel chaired by former Supreme Court Justice Ellen Gracie, the senior consultant for APAV's (Portuguese Association for Victim Support), Rosa Saavedra, the representative of Peripherie:  Institute for Practical Gender Research in Austria, Doris Kapeller, and the Secretary General of the European Women's Lobby in Spain and member of the European Women's Lobby, Teresa Nevado Bueno, presented the best practices adopted in their countries for the prevention of violence against women.

Suzana Fagundes, vice president of HR, Legal and Sustainability at ArcelorMittal Brazil, spoke in the panel on corporate social responsibility in the protection of women against domestic violence.  The following speakers, Daniella Binato, Rio de Janeiro State Law Judge; Sandra Gomes Melo, police chief in the Federal District Police Station for Women; Cláudia Regina dos Santos Albuquerque Garcia, public prosecutor in the state of Espírito Santo; and Erica Verícia Canuto de Oliveira Veras,  public prosecutor in the state of Rio Grande do Norte, shared their experience regarding state action in the prevention of violence against women and highlighted the importance of a risk assessment form.

The last panel featured the civil society's perspective on this problem and was attended by former model and activist Luiza Brunet, in addition to Isabela Venturoza, an anthropologist and collaborator of the NGO Feminist Sexuality and Health Collective, and Anne Caroline L. Grudtner da Silva, Ph.D. in public health from the Federal University of Santa Catarina, who addressed initiatives to assist aggressors as one of the ways to prevent the recurrence of violence.

In the closing ceremony, Maria Rosa Sabbatelli, of the European Union Delegation in Brazil and Head of the Regional Teams Americas of the EU Foreign Policy Instrument, thanked the partnership with the CNMP and emphasized the "importance of international cooperation to combat violence against women".