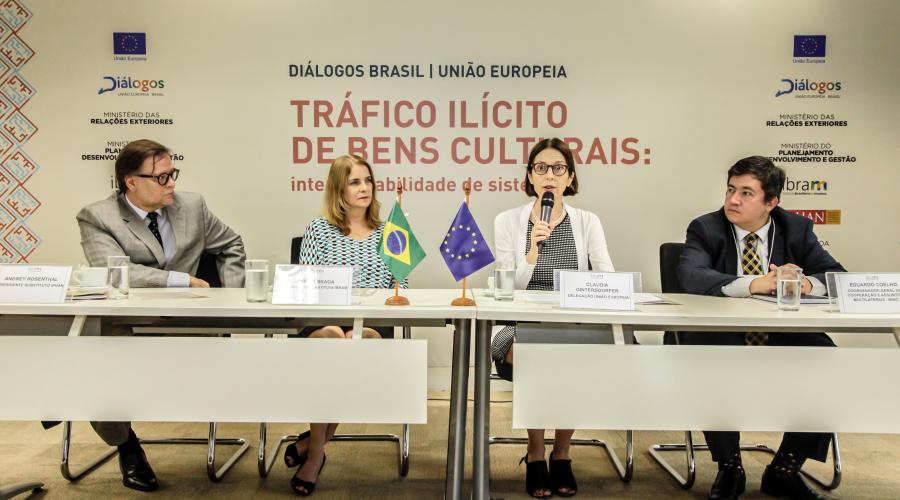 The Ministry of Culture (MinC) and the European Union have come together to combat illicit trafficking in cultural goods. On December 18, during a seminar in Brasilia, a project which seeks to improve the data systems of stolen cultural goods and promote greater interaction between these systems was launched.  This initiative is part of the EU-Brazil Sector Dialogues.

Illicit trafficking in cultural goods is a global issue that crosses borders and poses a threat to the memory and culture heritage of humanity. Works of art, religious articles, archaeological artefacts, bibliographical collections and historical documents, among others, are susceptible to being stolen and illegally traded, and are also used in crimes such as money laundering and even terrorism financing.

During the seminar, Brazilian and European experts presented successful experiences in combating trafficking in cultural goods.  Claudia Gintersdorfer, Chargé d’Affaires a.i. of the Delegation of the European Union to Brazil, highlighted the importance of this partnership between the Brazilian government and the EU member countries. "Together with Brazil, we want to establish rules of cooperation for the proper protection of cultural goods" she says. "This issue is of great concern to us. Illicit trafficking deprives different cultures of their identities."

For the General Coordinator of Cooperation and International Relations of the Ministry of Culture, Eduardo Pareja Coelho, it is essential to have technological support to face this challenge. "One of the crucial mechanisms to implement an effective policy to fight this problem is to enhance the systems of protected and stolen goods," explains Coelho. "One of the goals here is to learn from European experiences."

The substitute president of the Brazilian Institute of Museums (Ibram), Eneida Braga, spoke about Ibram's register of museum articles, created in 2010, which also provides information on goods that have been stolen or gone missing.  "The state needs better strategies to combat this type of trafficking," she says.  "One of the main focus areas proposed is the creation of the foundation for the interoperability of all Brazilian database systems," she added.

Andrey Rosenthal, the substitute president of the Institute of National Historical and Artistic Heritage (Iphan), also participated in the seminar and presented some systems the institute has which can help in addressing this matter. Among them we can highlight the Art and Antique Dealers Register (CNART), which provides a register of dealers and auction agents who trade antiques, works of art of any kind, manuscripts and old or rare books.  Another initiative of Iphan presented by Rosenthal is the Database of Missing Cultural Goods (BCP).

Throughout the day, European and Brazilian experts gave presentations on systems of documentation and monitoring of cultural goods, studies on networks of illicit trafficking and actions already in place in Brazil to fight this type of crime.  Italian researcher, Alessia Bardi, from the National Research Council of Italy brought European examples of data systems and projects that support research related to the subject, such as PARTHENOS.

Samuel Andrew Hardy, British researcher at the Institute of Archeology of the University College London, spoke on the panel about experiences using information technology to fight illicit trafficking in cultural goods: open-source research. Hardy studies mainly the international networks of illicit trafficking in cultural goods in conflict areas.  According to him, it is possible to retrace the route of a stolen property, from the moment it was taken from the place of origin until it gets to the final buyer. For the British expert, law enforcement could make use of this information to investigate these crimes.

Javier Finat, from the University of Valladolid in Spain, will be the European senior expert in this project supported by the Sector Dialogues.  He discussed the connection between cultural information systems and registration and control systems.  Finat defended, among other things, the use of technologies such as the Internet of Things (IOT) and techniques for the tracking and simulation of possible criminal behavior as essential in combating illicit trafficking in goods.

To conclude the seminar, the last panel discussed the work of Interpol in Brazil.

Federal Police chiefs Bruno Samezina and Paulo Teixeira, both from Interpol in Brazil, gave an overview of the existing tools and also addressed the necessary steps towards an effective fight against illicit trafficking in cultural goods.  According to Texeira, the Federal Police have carried out 1,084 inquiries related to illicit trafficking in cultural goods in Brazil in the last 12 years.

On Wednesday (19), technical meetings were held at the Brazilian Institute of Museums (Ibram).  As part of the project, Brazilian experts are expected to make technical visits to Europe this coming year.

*Based on information from ASCOM and the Ministry of Culture (MinC)