5th Regional Conference of State Prosecutors marked the end of a series of events this year on gender equality in the Federal Prosecution Service. Conference was held in Bento Gonçalves (RS) on June 28th and 29th. 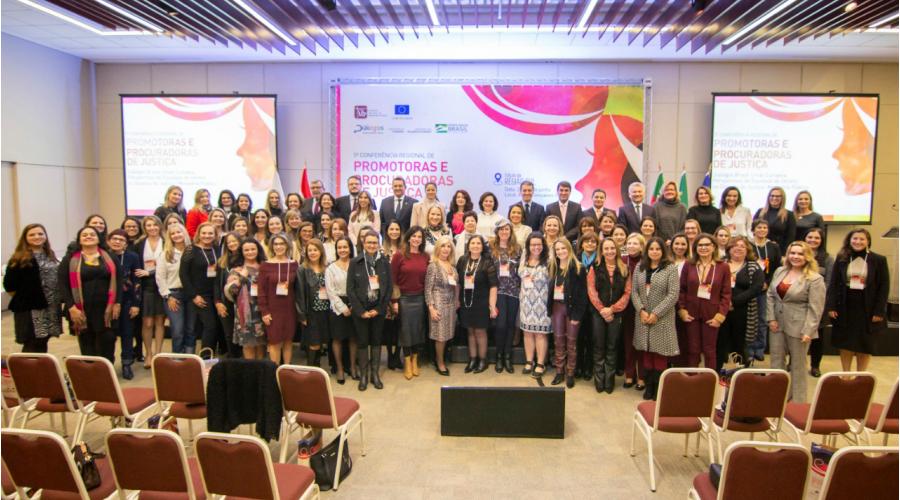 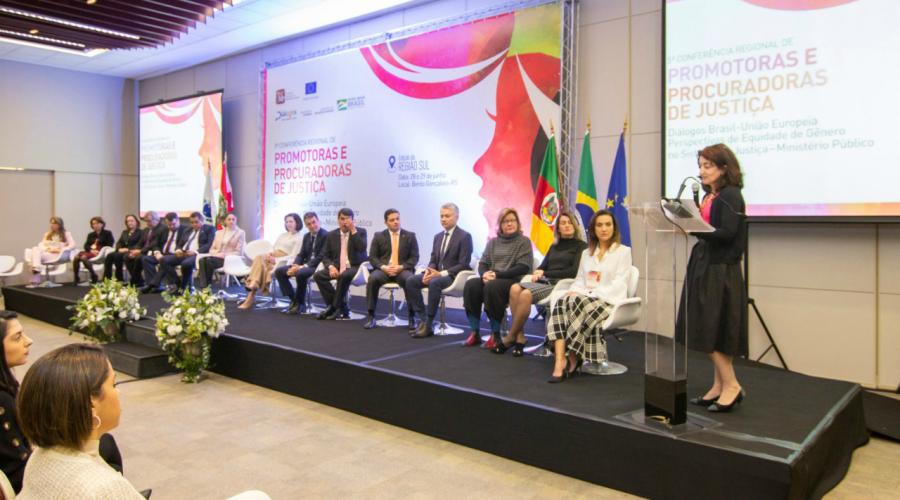 "The women's suffrage and women's liberation movements started in the 20th century have not been completed. Women still face visible and invisible obstacles that need to be overcome." Those were some of the words used on Friday, June 28th, by Raquel Dodge, chairwoman of the National Council of the Prosecution Service (CNMP) and Attorney General, during the opening of the 5th and last Regional Conference of State Prosecutors in the South of Brazil, held in the city of Bento Gonçalves (RS).

As a result of the partnership with the European Union (EU), since its first edition in February, the project has brought together more than 300 people. They talked about gender equality and addressed aspects related to women starting a career and climbing up the ladder in the institution. Pay equality was another important topic along with women holding positions of power, such as CEOs in private and public organizations and, specially, in politics.

The Head of the Political, Economic and Information Section of the EU Delegation to Brazil, Domenica Bumma, stressed the importance of this two-year partnership with CNMP to advocate for gender equality and women's rights. "This strong partnership between the EU and CNMP is based on deep convictions and shared principles.  Both sides  strongly believe that gender equality is essential for a democratic, just, tolerant, and inclusive society, committed to ensuring equal opportunities for women and men," she said.

Ms Dodge made a point of highlighting that gender equality is still a recent discussion, a process under construction, and that the event is making history by creating a forum to give the proper and serious attention it deserves. "We tend to carry out quantitative analysis. At these conferences, the purpose is to allow subjective analysis. Do we want to hear them under pretensions, perceptions, motivations that explain how we act, based on the agenda we advocate, or based on our real take on the subject? What are the visible and invisible obstacles and how do they impact our work?" she questioned.

CNMP's chairwoman said that the conferences have broadened the scope of the discussion by focusing on the advances and challenges presented to women around the world.  She cited the 1948 Universal Declaration of Human Rights as the starting point. As she pointed out, the Declaration was proclaimed at a difficult moment in the world, after the Second World War, and it marked the first time men and women had their inherent dignity recognized. Ms Dodge emphasized that the Declaration triggered a revolution in civil law.  She talked about Brazil and the legislation that granted women rights, such as the right to manage their own assets, have custody of their children, and bodily integrity. She also stressed that, at the conference,  the debates should focus on the progress made so far.

Mr Dallazen, the only man to speak, praised the initiative, and advocated a plurality of actions in the Federal Prosecution Service, highlighting the need for respecting differences. "An event discussing this issue sheds light on different aspects and shows the international community how our institutions work. It reveals what needs to be adjusted so that we can move forward with this agenda," he emphasized.

Representing the National Association of the Federal Prosecution Service (CONAMP), Martha Beltrame said that prosecutors are ready to overcome barriers, and stressed the importance of the conference to increase women's participation not only in the institution, but also in other Brazilian organizations. "Through proper training, women must be allowed to further contribute to the advancement of our institution," she said.

Representative Liziane Bayer also touched on the importance of increasing women's participation. She recalled that less than 20% of the parliamentarians in the House of Representatives are women and advocated that having competent representatives to push for women's interests is essential. "We are going through a cultural transformation. We can move forward together”.

On one of the panels, prosecutors who had participated in previous editions of the event gave their testimonial, sharing what had changed in their lives since.

Amazonas prosecutor Cley Martins spoke about the 1st Conference in the Northern Region, held in Manaus-AM in February.  "The moment we saw reality as it really was, we realized that we, women prosecutors from the Northern region, were numb and paralyzed.  We thought that just because women could be prosecutors now that in itself was progress," she said.

Bahia Attorney General Ediene Lousado also revealed how transformative the holding of the 2nd Conference of the Northeastern Region (Salvador-Bahia) was. "That meeting impacted all of us women, and made us see things that we had long forgotten," she said.  The Office of the Bahia State Attorney General shared its lessons with other editions, encouraging all the participants to reflect throughout the meetings.  “Today I am a new woman. I am not the same person who was here at that first conference. ”

For Goias State Prosecutor Alice de Almeida Freire, the 3rd Regional Conference of the Midwestern Region, which took place in Goiânia-GO, was a moment of total immersion and discovery. “It was a great awakening. It was then that we understood the vulnerability and disrespect we often went through without even realizing it," she said.

Rio de Janeiro State Prosecutor Carla Araújo got emotional when sharing her experience. "At the 4th Conference, there was hardly anyone from my Office there.  I left the meeting thinking: this will change”, she said. She works in the area that deals with ​​violence against women, and felt rather anxious when registrations for the event opened. But, thankfully,  expectations were exceeded. "If it were not for the conference, each of us would not be focusing on this issue, on women's rights, which is so dear to our hearts," she said.

Ms Dodge, who led the panel, stressed how the conferences have included previously unacknowledged topics throughout their editions, making it possible for discussions to evolve and flourish. "In the city of Manaus, we have heard accounts of violence against young girls. In turn, in Salvador, we began to discuss the issue of race combined with gender," she said. Ms Dodge finished by thanking everyone for their testimonials. "These accounts make us realize that there are many visible and invisible obstacles to achieving gender equality within our institution.  But we cannot give up”, she concluded.

*Based on information from ASCOM and CNMP