The event was the second of five regional conferences to be held within June in partnership between CNMP and the Delegation of the European Union to Brazil, within the scope of the EU - Brazil Sector Dialogues. The goal is to provide a clearer view of the reality of promoters and prosecutors justice in their respective regions. 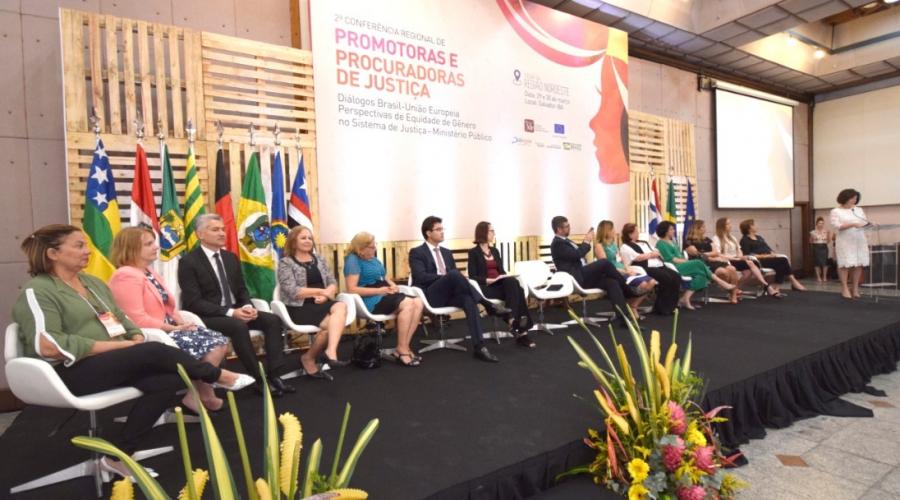 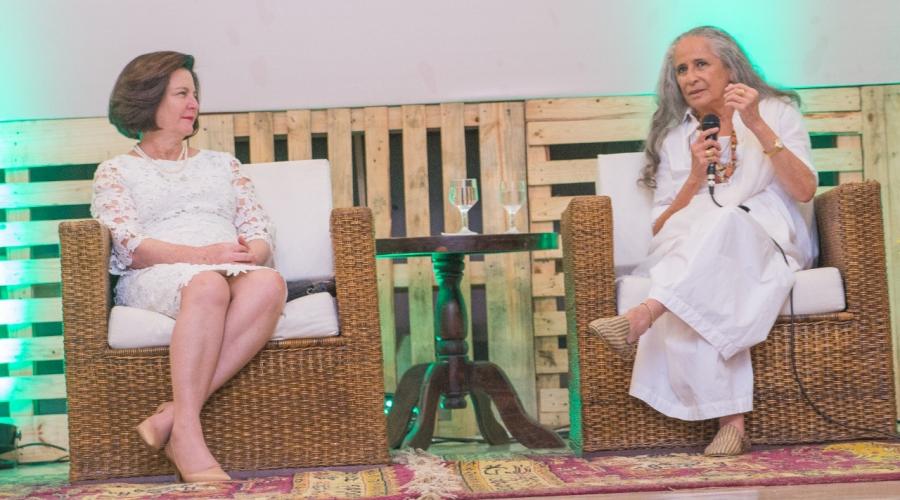 Ninety members of the Public Prosecutor's Office came together in Salvador last week to attend the "2nd Regional Conference of State and Federal Prosecutors - Northeastern Region."   On Friday afternoon, 29th of March, Raquel Dodge, President of the National Council of Public Prosecution (CNMP) and Brazil’s Attorney General, and Claudia Gintersdorfer, Chargé d’Affaires a.i. of the Delegation of the European Union to Brazil, opened the event, which aims to discuss and gather proposals to promote gender equity in the justice system. During the seminar, the European perspective on this matter was also presented.

Claudia talked about the "fruitful" partnership with the CNMP, which she considers very important to strengthen gender equity policies.  According to her, Europe faces challenges in this area, so as Brazil. "Although European women have a higher level of education than men, they earn 16% less per hour of work.  In addition, 44% of Europeans think that women should take care of their homes and families”, she noted, stressing that "fighting for equality between men and women is not only a moral duty but also a matter of social justice and equal access."

The EU representative also recalled the words of Vĕra Jourová, Commissioner for Justice, Consumers and Gender Equality: "Gender equality is not just about women.  It is about our society, our economy and our demography. We want to guarantee that women are truly equal to men before the law.  We will also continue work to empower women, so they can make their own choices when it comes to their careers and their families."

Ms. Dodge addressed the audience  and recalled that the role of the Public Prosecutor's Office is essentially to protect and promote rights and that taking care of women members of the Institution is also necessary. "We cannot forget ourselves.  Once gender equity is a reality within the Public Prosecutor's Office, it will become stronger in our society and other public institutions, driving the creation of other public policies that promote equality between men and women", she said.

The President of the CNMP said that, in the modern world, women face numerous challenges in trying to be what they want to be.  "Balancing family, marital and professional challenges is a remarkable daily effort", she said.

According to Raquel Dodge, the main purpose  of the conference is to encourage promoters and prosecutors of justice to reflect on the path and obstacles to entry, assignment, permanence and movement within their institutions. She considers the event an appropriate opportunity to discuss good practices adopted in Public Prosecutor's Offices, and reflect on the occupation of institutional management positions, as there are still few women in top positions of  Prosecutor’s Offices.  “We are witnessing history here.  Ediene is the first woman prosecutor in the state of Bahia”, she said.  Ediene Lousado came to office after 400 years of the PPO in Bahia.

At the opening of the conference, Ediene addressed the need for women to resist in order to create solutions. "We must leave here today with strategic positions that will allow us to define mechanisms to claim our rights", she said.

The event, the second of five that will be held up to June, is promoted by the CNMP Board, through the Secretariat for Human Rights and Collective Protection and the Commission for the Protection of Fundamental Rights (CDDF / CNMP), in partnership with the Delegation  of the European Union to Brazil, and with the Prosecutor’s Offices in Northeastern States (Bahia, Maranhao, Piaui, Ceara, Rio Grande do Norte, Pernambuco, Paraiba, Sergipe and Alagoas).

"What do you think allowed you to be heard throughout your life?", Raquel Dodge asked the special guest of the night, singer-songwriter Maria Betania. “I've never lied. I don't lie. I'm moved by the truth", she replied. This was one of the most moving moments of the conference, during a conversation circle held with members of the Public Prosecutor's Office, where the singer shared stories, experiences and insights about her career and family.

Maria Betania, a surprise guest, talked about the beginning of her career as an artist, at the age of seventeen, and shared the difficulties faced as a child, when she already felt the burden of responsibility because of her success on stage. "My family has always supported me.  When I told my father I had been invited to be a singer, to replace Nara Leao in Rio de Janeiro, he said:  You can go. If you are happy, you are the one responsible. If you are not, it's my fault", she revealed.

When talking about her mother, Dona Cano, the singer drew applause from the audience. "My mother was a warrior, an example to be followed.  A strong woman, a talented community leader who did everything for her people", she said, detailing her mother's achievements in the city of Santo Amaro, where she was raised. The stories inspired and encouraged the prosecutors and promoters of justice who went to Bahia to discuss gender equality.