At UN event, CNMP announces FRIDA and shares experience in fight to stop violence against women

FRIDA, a form that assesses the risk of a woman being victim of domestic violence, was developed within the framework of a project supported by the European Union - Brazil Sector Dialogues Facility. 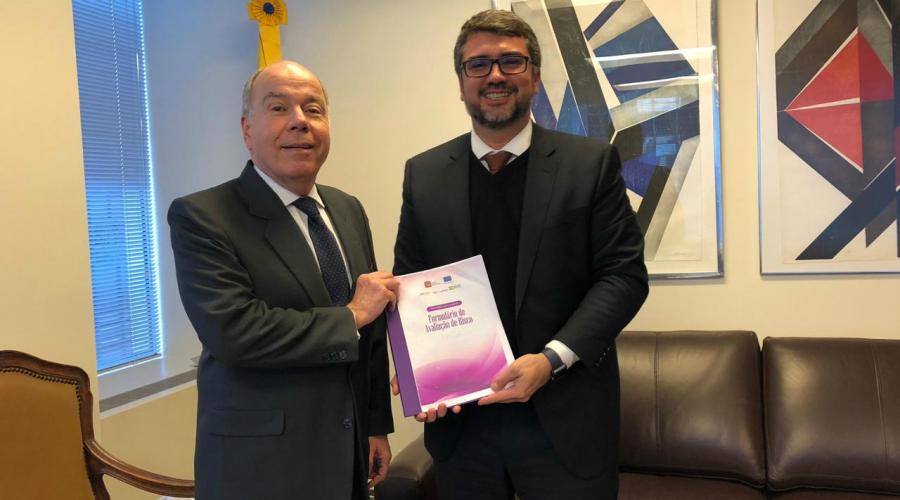 Valter Shuenquener, Councillor at the National Council of Public Prosecution of Brazil (CNMP), attended the 63rd session of the Commission on the Status of Women of the United Nations (CSW63), held in New York, United States, from 18 to 22 March.  Mr. Shuenquener attended the session at the invitation of the Minister for Women, Family and Human Rights, Damares Alves, and represented CNMP's Commission for the Protection of Fundamental Rights (CDDF). The goal was to promote Brazil's Risk Assessment and Life Protection Form (FRIDA), and identify the possible roles of the Brazilian Public Prosecutor's Office in the fight against domestic violence.

According to Valter Shuenquener, "The Commission on the Status of Women (CSW) is the second largest UN annual event, and an important arena for discussing the main topics related to the status of women in the world.  During the event, we had the chance to hear experiences from all over the world when fighting domestic violence against women. We could also present the main aspects of the FRIDA risk assessment form, recently developed by the CNMP, through the CDDF, in partnership with the European Union. This was a unique opportunity to show the world what Brazil, and especially the Public Prosecutor's Office, with the full support of Raquel Dodge, Brazil's attorney general and chair of CNMP,  has done to reduce domestic violence against women."

FRIDA is the result of a project within the framework of the Sector Dialogues Support Facility entitled "Brazil-European Union:  Pathways to Fighting Domestic Violence". The project focuses on sharing knowledge and real experience among participating countries, in order to find solutions for the fight against domestic violence. This risk assessment form, scientifically developed by European and Brazilian experts, addresses the level of risk faced by victims of domestic violence.

According to Valter Shuenquener, domestic violence against women, including femicide, is a global issue and, therefore, all continents must engage in this fight. "This is a matter of humanitarian concern which needs to involve the whole planet, and the 63rd CSW creates an enabling environment for assertive discussions around a common problem.  In this environment, cooperation is the driver to help us reach answers which will add to the initiatives the participants have already tested in their respective countries," said the councillor.

In the event, the councillor also met with the Brazilian ambassador to the UN, Mauro Vieira, and explained that FRIDA is an instrument used in the prevention and fight against crimes characterized as domestic and family violence against women. This form is a study containing questions whose answers will help identify risk factors that suggest future or repeated acts of violence. The questions on the form were created based on the experience of several countries in their fight against domestic violence, with the institutional support of the Delegation of the European Union to Brazil.

During his meeting with Shuenquener, the ambassador also learned about the joint effort within the Judiciary, the Public Prosecutor's Office, Police Stations and the Ministry of Human Rights, through the National Domestic Violence Registry (CNVD), to use the form in investigation procedures of crimes involving domestic and family violence against women.

The Commission on the Status of Women (CSW) is the main global intergovernmental body exclusively dedicated to the promotion of gender equality and the empowerment of women. The Commission adopts multi-year work programmes to appraise progress and make further recommendations to accelerate the implementation of the Platform for Action. These recommendations become negotiated agreed conclusions on a priority theme.